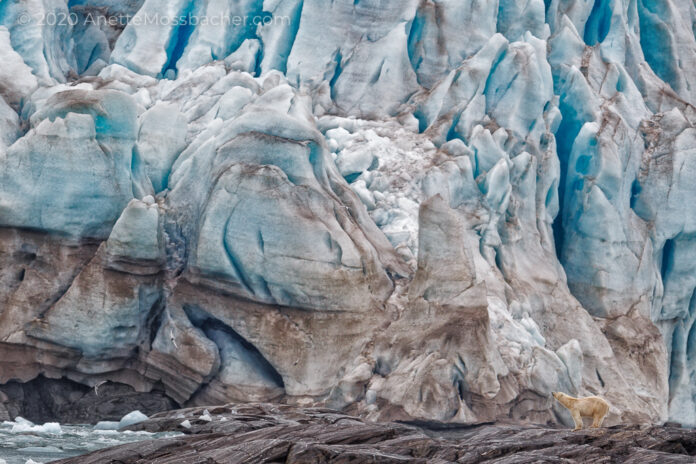 In 2015, I received an assignment for nature photography in Svalbard/Norway, Arctic. Being several times to the Arctic to photograph wildlife, the frozen world of icebergs has become a passion. With its wild, unique animals and nature, the frozen oceans and lands is a magical, peaceful place indeed. Pristine.

The aim of that assignment was travel and nature photography for responsible eco-tourism. While chatting with my client on the phone, I figured a photograph of a Polar bear in its habitat was high on the list. When I received the travel plan, curiosity hit me. Was there a Polar bear search on the list? No, I did not see any plan for Polar bears. Alright, 3 weeks Svalbard, who knows, maybe one of the impressive Polar bears gives us an unexpected encounter.

In the first 14 days, the assignment has sent me to some extraordinary places. To the most Northern town in the Arctic, a radio station close to Longyearbyen, you name it. The last trip was going to Billefjorden with a guide for a few days. Traveling by a high-speed boat from Longyearbyen to the end of Billefjorden took about 2 hours on mirror flat water. It was fast, indeed. In Svalbard, you need to be accompanied by a guide with a rifle for your safety.

Arriving at the cabin in the late afternoon, we, including one more guest, received our safety briefing just in case a Polar bear visits us. The guide gave me a personal briefing with a big underline; “your radius around the cabin is 5-7 meters, no further for photographing! If you want to go further away you need to tell me so that I can accompany you with my rifle as safety!”

“your radius around the cabin is 5-7 meters, no further for photographing! if you want to go further away You need to tell me so that I can accompany you with my rifle as safety!”

We settled in the cabin, which was located beautifully between boulders with a view of the colossal Nordenskiold Glacier with a larger rocky island in front. Every time the glacier was calving, a thunder sound went through the ‘silent’ fjord. Sometimes we even heard the splashes of the massive ice junks falling into the sea. I was already outdoors with all my camera gear. First, I needed to explore where I set up my tripod within my invisible radius around the cabin. That was easy. We had a view of the glacier right in front of us with the mountain scenery. We saw and heard the glacier calving often during the late afternoon. In the evening it started to get less, of course, it was getting under 0 degrees.

Unexpected Encounter With The Polar Bear

6 am the next morning. I made me a cup of coffee when the guest (let’s call him Tom) mentioned he does not see any seals in the water. My curiosity set in, I started to scan the sea and beaches for seals. First thing I spotted was a lone Polar bear wandering on the large island in front of the glacier! I was shouting, “Polar bear, you find me outside,” to the guide in the back of the cabin.

On my way running outside, grabbing my cameras, tripod, jacket, slipping fast into my boots (the shoelaces I stuffed into my socks), all needed to go fast. I would never have guessed to see a Polar bear in this fjord. This unexpected surprise I did not want to miss. All setup, one camera with the big lens with my winter jacket as a beanbag on a large rock a bit higher up. The second camera was on the tripod. Every step, I was following this beautiful animal through my cameras. What an encounter with a Polar bear, what a surprise. Suddenly, our guide stood beside me. That gave me a giggle, wearing long Johns and undershirt with a rifle in his hands. Safety always comes first. I stood in my invisible, assigned radius!

You Forgot Your Coffee

Photographing the Polar bear’s unexpected appearence, I was climbing up a boulder to use the camera on the rock, jumping down using the second camera on the tripod. I went back and forth between cameras. Just getting warm to jump between my cameras, Tom handed me a cup, saying, “Anette, you forgot your coffee!” It was a nice gesture, but handing over a winter jacket or my sweater hanging on the chair inside the cabin would have most likely helped more. Also, I had no free hand to drink coffee when the most wanted animal on my client’s list has appeared in such a landscape!

The Polar bear was exploring the whole island, searching for food. Once, he went to the water and looked at me. My thoughts, bummer, now we appear on his menu for today! But he was not interested and continued his search by giving me some great opportunities for nearly one hour until he disappeared behind the island. For several hours we observed the area if he may show up again, no luck.

At dinner, again, Tom mentioned that he does not see any seals. Well, I saw quite a few seals on the little icebergs floating in the sea, as well as our guide. The binoculars on the shelf came in handy for Tom. I placed a few books on the table as a tripod, on top I put the binocular. I pointed the binocular in the direction of the closest seal. Finally, Tom was able to see his beloved seals.

While he was searching, I suddenly saw behind that seal a Polar bear standing up. That bear was not too far from the seal. Again, I was shouting, “Polar bear, you find me outside”. This time I only grabbed my camera with the long lens, as the animals were quite far in the distance. Looking through the lens, I saw the seal slipping from the ice into the water. With about half its body above the surface, it was carefully looking around. The seal went under water and came up on the other side of the ice again. For sure, the seal smelled and felt the presence of the apex predator. Suddenly, it went down lightning-fast, and within 15 seconds, the Polar bear climbed on the ice with the seal between its jaw. He caught his dinner.

We know the apex predator is an excellent swimmer, and the primary habitat is the ice covering the Arctic ocean. For sure, the encounter with a Polar bear in this beautiful fjord was unexpected for me. We have been 3 more days in the cabin but didn’t seen the Polar bear again. Only his tracks not too far from the house, when we went up the glacier. When back in Longyearbyen, I sent a selection of the Polar bear’s photos to my client. I assume you can imagine that they were more than happy. The messaging on the phone did not stop. Assignment accomplished.