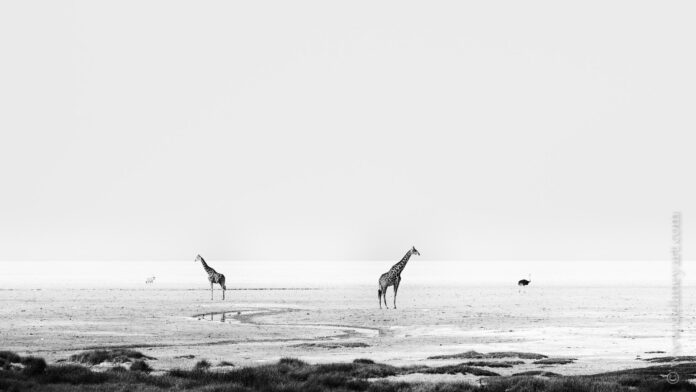 I can taste the sand in the air; it is palpable. My eyes water from the berg wind carrying the sands of the Namib and white dust swept from the basin of Etosha pan, which has turned the sky to middle grey.

Etosha pan scarred with cracks glistens through a heat haze. The remnants of vegetation act like a vignette along its edges. In the distance, I can make out the forms of animals through the heat haze wearily making their way to the edge of the pan to quench their thirst.

My eyes notice a freshwater spring; it bubbles to the top and meanders slowly carving a beautiful “S” shape in the white calcrete surface of the pan.

My senses go into overdrive, thinking of how I could use this shape to create a photograph. I decided to treat this location as a street photographer and wait for an opportunistic moment when a subject would pass by.

Hours earlier and some 50kms away, I spotted two giraffes striding along the edge of the pan. I thought this strange as there were no trees or bushes in the direction they were travelling. Little did I realise that these giraffes would be heading to the same destination as me.

After a few hours of waiting, I had not taken a single photograph with my GFX100; then my heart skipped a beat when I noticed the two giraffes in the distance. I was astounded by the range they had covered to drink from the spring in front of me.

This waterhole on the edge of Etosha pan is a lion ambush haven. The surrounding area covered with the sun whitened bones of animals who had succumbed to these ferocious predators.

I was alert as adrenaline coursed through my veins. The possibility of making a photograph was now more than a chance. The giraffes were aware of the dangers of drinking from this waterhole. One giraffe walked to the top of of the stream and faced west, the other giraffe went to the middle of the stream and looked east. They took turns to drink while the other watched. I was waiting for the moment when they both stood upright. I calmed myself down as I peered through the GFXs 100 EVF, which felt like I was watching the events unfold on an Imax movie screen.

The scene was a few hundred meters in front of me. I was worried about the haze and harsh sun that was somewhat diffused by a heavy-laden grey sky. I was hoping the new Fujifilm GFX100 and the optically superb GF250mm, might in some way defy the physics of photographing in the middle of a scorching day with heat haze and dust.

Where before scores of animals were walking to and fro. All of a sudden, it was just my two giraffes and the ghost-like silhouette of an oryx in the background and a strutting ostrich, who completed and balanced my composition. I composed leaving lots of negative space, keeping the horizon on the thirds, I kept the dune grass on the edge of the pan to anchor the composition. Then the moment I was waiting for, happened, the male giraffe turned, walked in the opposite direction to his partner, he stopped creating symmetry. My composition was complete. I pressed the shutter, capturing the moment forever. Within seconds both giraffes turned and started their long trek back in search of food.

Now the moment of truth, It took me a few seconds to pick up the courage to press the play button on the back of my GFX100. I peered through the Imax screen of the 100s EVF. I could not believe my eyes. The image considering the conditions exceeded my expectations.