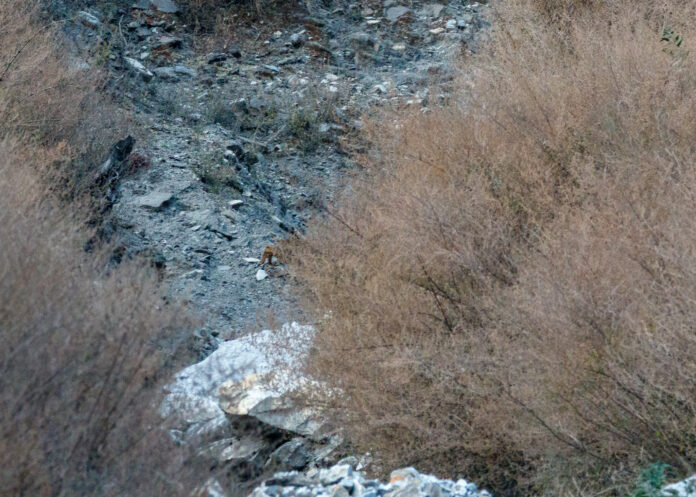 The story that I am going to tell happened on one of the last days of 2018 while I visited Nepal searching for the Mainland Clouded Leopard.

I won´t tell you the exact location because the researchers and national park want to keep it a secret until they have done some proper research and also been able to start to have sustainable travels there.

All I can tell you it takes many hours in a bus on bumpy roads that have plenty of hairpins turns climbing up and down the mountainside with load noisy Nepali videos playing on the TV set.

I got to the park at went for a trek that took another three hours until I got to the lodge that we had as a base.

As soon as we got there we had dinner and waited for the sun to set. We knew that there had been Sunda Clouded Leopards in the area recently so we got the camera equipment ready, checked all the flashlight and discussed if we should walk up or downhill. We settled on uphill. We just had to check the tree just outside the door. We stepped outside, turned the light on, shone along the tree trunk and suddenly a rather big animal with big shiny eyes, slim body and a really long tail looked at us. We looked at each other and just mimed: – CLOUDED LEOPARD. I had my camera and flash turned on so I just started to fire away. I manage to get some flash photos but I knew that I never got anything useful because the cat run head down fast as a falling star to the ground and took off. A split second later another noise came from another tree. We looked up and another pair of eyes look at us. We just: -Another clouded leopard! I fired some more photos and thought this must be the best place on the planet to find Mainland Clouded Leopard. We had been out for less than five minutes and already seen two of them. My heart and mind were just in a very happy state. Just unbelievable. I didn’t mind too much that I missed the photos. Yes, I moaned a bit but not that much (I think). I knew that there were plenty of more chances because I had nine more days in the area.

We were all pretty sure that both of them was clouded leopards. It actually took some hours until I started to digest what I had actually seen. The second was larger, had a bigger head and were not as agile as the first one. We came to the conclusion that is must have been a binturong (Arctictis binturong) eating the fruit in the tree and the clouded leopard was on a hunt for it. Really unfortunate that we disturbed his hunt so that he missed his dinner.

The next morning we went for a trek in the mountain for some hours looking for tracks, pug marks and poo. We saw plenty of all. We also sat on a lookout for some hours watching the mountainside and had sightings of wild boars (Sus scrofa cristatus), macaques (Macaca assamensis), Gray langurs (Semnopithecus schistaceus), muntjac (Muntiacus muntjak), chevrotain (Tragulidae indica), tahr (Hemitragus jemlahicus) and even a Yellow-throated marten (Martes flavigula).

While I sat there for hours I started to think that maybe I had had my chance on the cat. That is all I got to see. No, I had to stay positive because there are still plenty of days left.

The next day the same. A small bunch of mammals. That night we actually saw another clouded leopard very quickly quite far away in the spotlight. It was definitely a clouded leopard without a doubt.

When we came to the lookout the following day it felt special somehow. We all had that feeling that this is the day when everything will fall into place. It started off really well with a Yellow-throated marten that visited us on the special passage that was a landslide that the earthquake had created between one area with low bushes and another with trees and scrub. Most animals crossed on almost the same spot even if the slide covered a large portion of the mountainside. They stay at the edge hiding, walking carefully, slowly to the other side.

We had that part under constant surveillance. We waited for many hours. You get tired of standing, sitting, crouching and leaning against a tree. Your mind starts to wander off. You think of your family at home, Christmas, that yummy Swedish herring, ice cream, warm food, sitting by the warm fire and bloody hell that is a clouded leopard crossing on the landslide. Where did he come from, he ran like a rocket on fire. He was gone into the scrub. You could see it moved now and then. I checked my camera after a while and thought maybe I got that tail that I saw. My guide was so happy that it was a clouded leopard. He saw it properly but I wasn’t fast enough to locate it when he pointed and whispered. Fuck me! I got a bit grumpy that I missed my change even if it was only a split second. Maybe I could have got a photo of a clouded leopard in daylight. Not many people have seen them in daylight let alone photographed on. Just my bad luck and slow reactions. Or rather slow focusing with my eyes on the right spot. Well, stay positive!

Then we had one of those days. I started off really well with a large troop of macaques, then a mega troop of Gray langurs. They stayed in the area for a long time. Probably a couple of hours and it was so interesting to watch them eat, interact and play with each other.

The hours flew away that day and suddenly it was afternoon, the sun was starting to set and we knew that we had to walk down to the lodge in about an hours.

The valley was almost silent, nothing moved, except for a small family of muntjacs. They slowly walked across the landslide heading for a path behind a tree. We had seen quite many animals walk that path up to the mountain ridge and then disappear.

Suddenly my guide started to make faces and pointing to the tree. I looked and looked but couldn´t see anything except the muntjacs. What is special? I asked with a twist of my hand. My guide took a couple of fast steps towards me, pointed again towards the tree. I looked and looked, moved to my left a bit, moved to my right quickly to change the angle of view but saw nothing. Now my guide was almost jumping up and down, whispering: – clouded leopard. Pointed to the tree, got his mobile phone out, photographed the tree and showed me. Now I saw something. I turned my sight to the tree and saw something behind that to me looked like a cat. Suddenly it moved and was gone. I moved around again but nothing. My guide was calling out: -Hunting, hunting!

I just couldn’t see any cat or anything.

Then my guide said: Gone!

I just realised that I missed a clouded leopard that was hunting a muntjac and killed it. In daylight and I should have been able to see and photographed it if I was faster to locate it. My problem was also that I didn’t understand that it all happened behind the tree I was looking at. The clouded leopard had been hiding and jumped the muntjac from a black spot for me. All I had to do was to take a step or two to the right. I got very upset and started to swear and kicking stones, talking loud to myself, and almost threw my camera bag down the mountain. Stay positive! Fuck off. I am a bloody idiot! How could I miss that epic Nat Geo epic shot?

I haven´t been that pissed off in a very long time and I do apologise to all plants, trees, insects, animals and mostly to the people that had to witness my brain meltdown.

I took a long time getting over my worst experience of 2018. I am not sure if I am still over it. Or ever will be. Stay positive my ass!

Am I go back for another try at getting better photos of the clouded leopard? Of course, I am.