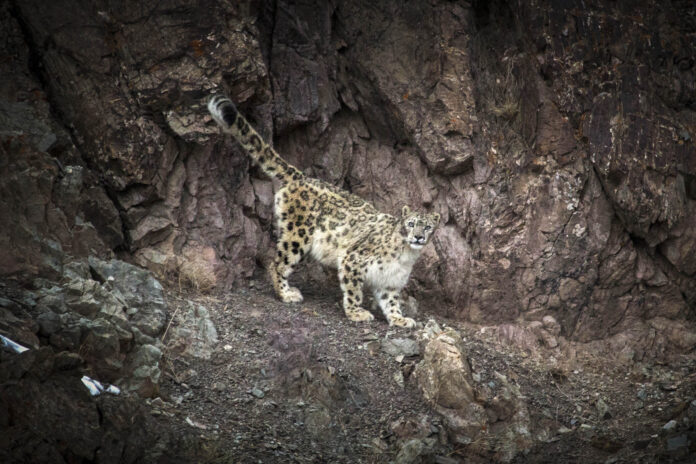 You have to be very lucky to see a snow leopard in the wild. There’s a reason why it’s called the Grey Ghost of the Himalayas. It’s one of the most elusive species in the world, and if you are lucky to see one, most likely it will be through a spotting scope as they patrol the high mountain ridges kilometers away.

On top of this: add one of the most harsh photography terrains on the planet. The snow leopard rarely descends below 4000 meters (13,000 feet). There’s only a short gap in the winter months (January – March), when it comes down for mating and hunting. This means you are constantly confronted with altitude issues, snow storms and temperatures dropping to – 30 Celcius (-22 Fahrenheit). I even had to sleep with my camera batteries tucked inside my underwear in my sleeping bag. To sum it up: photographing a wild snow leoapard is almost a mission impossible.

I was well aware of the low odds as I arrived to Leh National Park in northern India. But the Indian Himalayas are one of the most beautiful places in the world, and even If I would return without a single shot, I knew it would be worth the effort.

After one week we got a quick glimpse of our first snow leopard, about 2 kilometers away high up on a ridge. It was a wonderful sight and everybody cheered. But seeing a small dot through the scope wasn’t enough for me. This was a once in a lifetime opportunity. To get a good shot I knew I had to do something out of the ordinary.

On day 12, after spotting another cat far away, I decided to leave the group and seek the luck on my own. Earlier in the day, I had seen some blue sheep (the main diet of the snow leopard) grazing in a valley in the direction of where it was heading. It was getting late. It was a dangerous and difficult task, but worth the risk.

After a long climb I finally reached the valley ridge. I looked down and the sheep where still there. Unfortunately, no snow leopard. I started to wait. Lying still, flat out in the snow in – 20 C is not an easy job. In just over an hour, my body was so deep frozen I could hardly move.  I was just to give up and head back to camp, when I suddenly noticed how the sheep stopped moving. Their ears went on alert. Now I knew the snow leopard was close, and just a few minutes later, they all started to panic and run straight towards me.

When the dust and snow finally scattered, there it was: a magnificent female snow leopard right in front of me. My whole body started to shiver. Not just from the cold, but from the incredible experience. It was only about 100 meters (300 feet) away, so close that I could see it clearly with my bare eye. I took some quick photos and watched him wander up a rock wall. Ultimately, he stopped on a cliff right, and started to scout the valley below. The distance between us was even less. She looked straight into my eyes. Finally I put down my camera just to soak in the moment. I could hardly hold back my tears. This was undoubtly the moment of my life as a photographer. Still today, when I close me eyes, I can see her beautiful ice blue eyes and golden glimmering fur.

Tales from the Roads Less Traveled