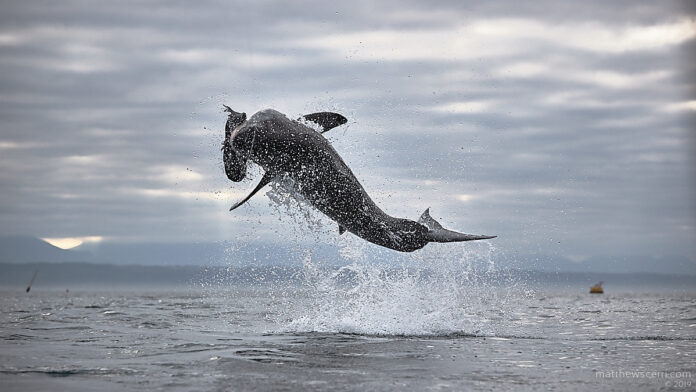 Jumping sharks – I distinctly remember watching a documentary right after school on Discovery Channel, back in 2001, called Air Jaws: Sharks of South Africa. As the title (” Jumping Sharks at Seal Island “) indicates the documentary was about the unique hunting strategy Great White Sharks employ around Seal Island in False Bay, where they leap completely clear out of the water when hunting Cape Fur Seals. Homework was out the window that day, and I remember thinking to myself that this was something I wanted to experience in the flesh. It was also one of the triggers that started my fascination with wildlife in the first place.

15 years later, with my wildlife obsession having gotten worse over the years and compounded with a passion for photographing it, I could not pass up the opportunity to give this a shot when the opportunity presented itself. This was made all the more enticing by the fact that I would get to spend some time with the same photographers and researchers who discovered this behaviour and shot that documentary (and so many sequels to it), Chris and Monique Fallows.

Hopping on a small boat, you leave before dawn for the 15-to-20 minute trip to the Seal Island in False Bay where of thousands Cape Fur Seals call home, to get there just as the light is starting to break. Before we even arrived, the first breach! A large white jumping shark with half its body out of the water, with the seal escaping. It was too dark to take a photo, even at f2.8 and stupidly high ISO, but with the whole even lasting less than a second, I realised the challenge that laid ahead.

Great Whites lurk in close proximity of the island, so the seals have to run the gauntlet whenever they go out or come in. When a spotter spots a brave group of seals leaving or coming to the island, we track them keeping our distance to minimise disturbance and the conflict starts. Contrary to what many may think, it quickly becomes apparent that unless the shark is able to get the hit done right away, the odds turn in favour of the seal. It was not uncommon to see seals taunting sharks too.

The week rolled on, the seas got rough (it is winter in the cape after all), the sharks kept breaching but never on seals we were tracking. I left without ANY jumping sharks photos but lots of great memories.

I was determined to do it all over again, so a couple of years later I went back for another full week. Sadly, we saw hardly any White Sharks around False Bay, with just a couple of attack attempts throughout the week. The harsh weather did not help, and on the odd days we could get to the island I managed to break my seasickness duck.

But as a firm believer that you miss a 100% of the shots you do not take, 2 years later in 2019 I was back at it. Sadly, my hopes of shark activity around Seal Island being poor due to an anomaly on my prior trip proved to be anything but. No Great White was sighted that year, and in fact other species of sharks that Great Whites usually prey on had moved in. In a last-ditch attempt, we relocated to Mossel Bay where a similar but much smaller island exists but was known to be frequented by a handful of juvenile whites. Breaching activity was not particularly known, but worst case you get to spend some time on a boat with potentially some sharks coming to the boat – I could think of far worse things to do.

We followed a similar routine, going out early in the morning with a boat all to ourselves. As predation activity is rare in this area we launched a decoy, a seal made of foam that behaves very much like a seal when towed at slow speeds by the boat. We laid down to get a low angle, put on the 70-200 at the 70mm end (you never know how a breach will go, and the decoy is only a few meters away), set up focus tracking to track black decoy in amongst the blue sea with back-button focus nailed down throughout, finger on the shutter ready to pounce, and the mind games began. It may feel like more of a sport of stamina at times than photography, but I guess that is pretty common with wildlife photography and to me, part of the allure.

We made a run with the decoy in gorgeous light, and absolutely nothing. You start wondering if there are even white sharks around! We made a second, and nothing still.

Then, finally, on the third run, something big moved quickly. With hardly any time to think, your finger instinctively goes down on the shutter and you and watch through the viewfinder as this amazing animal leaps full out of the water and lands upside down in a breach that took no more than a second. The first thought immediately goes on the thought of whether you got the pictures, but White Sharks are known to go back to the decoy after a breach so we kept tracking and could see the shark lose interest.

And once the tow was over I could finally see the image that took 4 years and 3 trips to South Africa to get, a breaching Great White Shark completely out of the water. I am not a fan of football, but I guess this is what it feels like for your team to win the world cup finals. The next day, the boat was full of research students who wanted to see it first hand, and we were lucky to have gotten another spectacular breach.

I cannot wait to be back for more jumping sharks at Seal Island.

Creating Fine Art Photography on a Family Outing during Covid-19