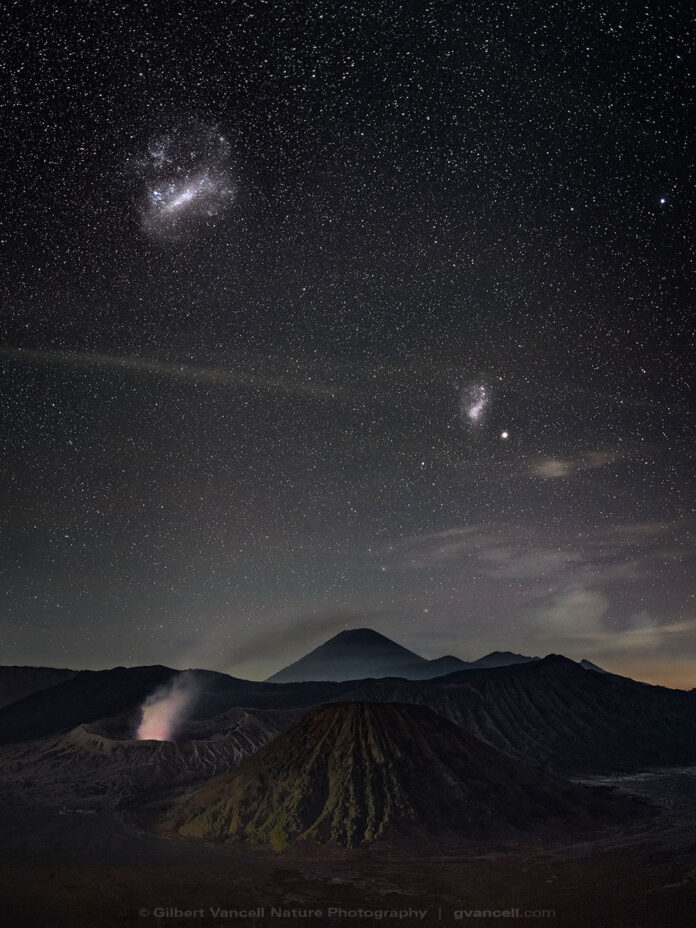 This is one of them, A first time! My first time shooting the Magellanic Clouds, and couldn’t have been any place better!

Reaching this park felt like a pilgrimage. I fell in awe with this marvel of Nature when I saw it for the first time in the film ‘Baraka’, a visual masterpiece by Ron Fricke which totally changed how I view the World and greatly influenced my photography. Bali has a lot to offer in 1 month, but being so close to Java I made it a point to visit this impressive volcanic formation.

I was already late for the Milky Way, so I settled for the next best thing in the Southern hemisphere – the Magellanic Clouds. Visible low on the horizon at this latitude, they perfectly aligned over the Tengger Sand Sea, which is a large ancient crater where 4 newer cones formed including Mt. Bromo (left) which is still active. The mountain in the background is Mt. Semeru, an active volcano and the highest peak on Java Island (3,676m).

I hiked up from Cemorolawang, a small village which is the gate way to the Park. It takes roughly 1.30hr to reach this spot as I did it earlier with my friend for sunset. I always try to explore the area during the day, as you don’t see that well at night and like this you are more confident that you don’t take unnecessary risks. After a short 2hr nap, I left and reached my chosen view point, just under Mt. Penenyakan at around 1am. As you never know the alignment until you are able to take test shots on the spot, I wanted to be there the earliest possible, so that I have a 3hr gap to shot before twilight.

My plan was to stay there till sunrise to capture the more iconic image of the first morning light hitting the volcanic cones.

Having mostly summer clothes, I was not prepared for the colder weather up at 2,460m. I had to make the most out of two fleece vests, light jacket and a shell. I took my spare wrist towels along and used them as improvised sleeves and gloves 😉 You need to get creative and make the most out of what you have available.
This view point was also exposed to light wind gusts every now and then and volcanic ash was getting in everywhere.

I was shivering all night, but all in all, when you manage to go back home with an image like this, for me it is always worth the effort 🙂

Creating Fine Art Photography on a Family Outing during Covid-19